The Fyansford limestone quarry is the last large human degradation of the Moorabool River before it joins the Barwon River near Geelong.  The river was diverted twice for the quarry - first to create it 100 years ago; later to expand it.   The concrete diversion channel destroyed the original ecology and flow of that stretch of the river.

Combined with declining flows in the system, the link to the estuarine environment and the sea for important migratory species is often lost for periods vital to their longterm survival.

The Moorabool River now loses up to 10 Million litres per day in seepage due to foregone base flows and the poor condition of the older works. Much of this seepage ends up in the quarry.

Dewatering the quarry sees up to 3,500 million litres per year pumped back into the river downstream. The Victorian Government classes this as an environmental flow for what is regarded as the most flow stressed river in the state.

The quarry's pumps will be turned off in the not too distant future. The current issues already facing this reach of the river will be greatly magnified when this happens.

Quarry with the recoursed Moorabool River passing around it. Geelong and the ringroad to the east.

The first river diversion occurred in the 1930s. The new path of the river was over a former spoil ground so a large section of it required concreting. Within a few years the concrete started to fail and water began draining from the river into the underlying spoil, much of it ending up in the quarry. Now the disrepair is so dramatic the river requires nearly 10 million litres per day of flow to make its way past this reach of the river. 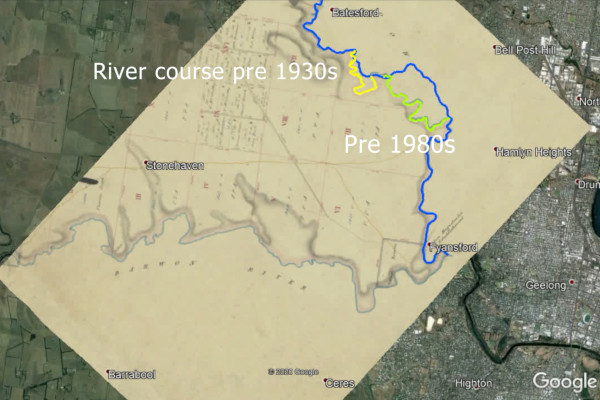 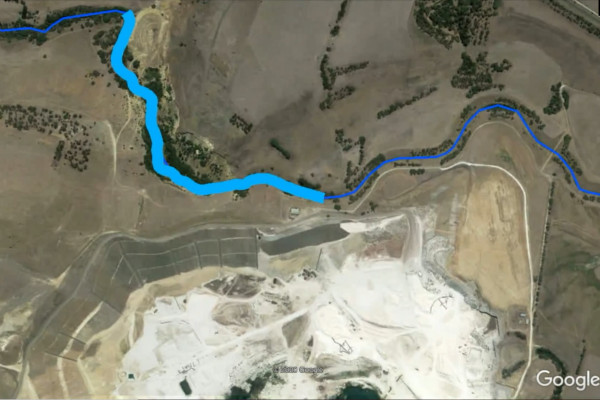 1930 recourse with many of its concrete sections in disrepair.

The water pools in several major breaks in its bed and as they dry out large numbers of fish can be trapped and ultimately without intervention will perish. Corangamite staff and quarry staff regularly work to save trapped fish from these fast drying depressions. 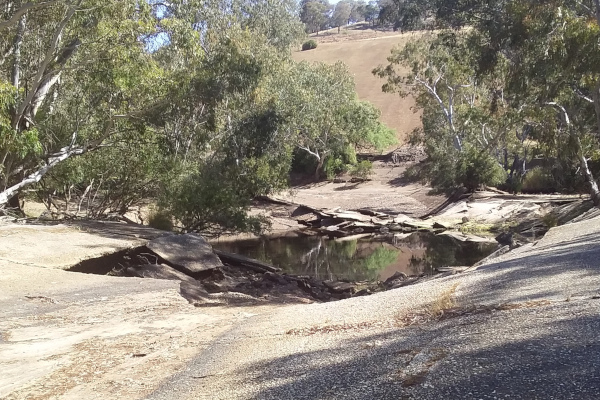 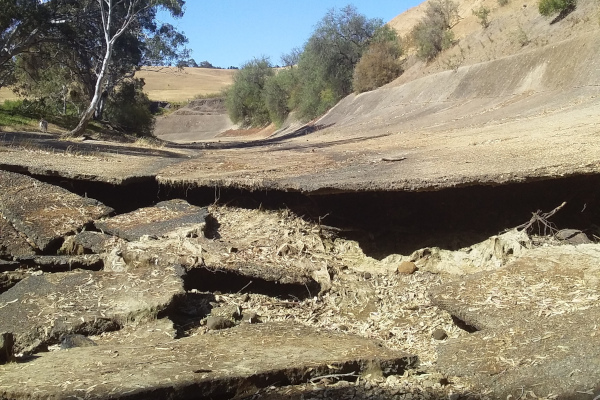 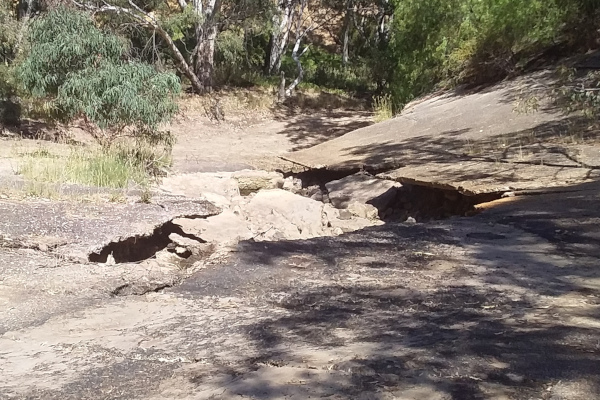 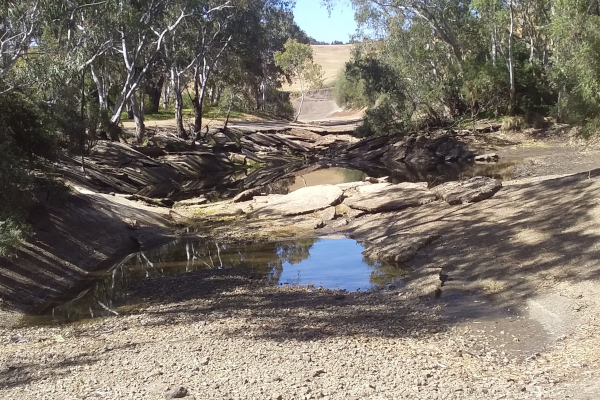 The second diversion occurred in the 1980s and is still mostly intact. However much of its length is of slab sided concrete construction. There is little opportunity for terrestrial fauna to access the river and little shade provided. Without flows the water becomes heated and with tepid temperatures combining with stagnate sections it becomes unconductive to native instream species. This section however does benefit from the current discharges from the quarry.

This section at least has the benefit of pumping volumes from the quarry as the outlet at its start. 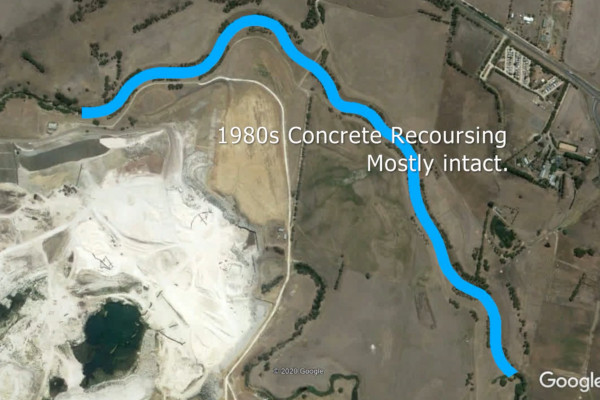 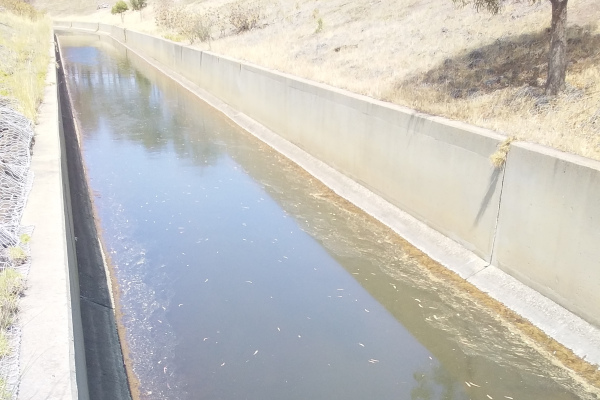 While this 1980s diversion is in reasonable repair its construction for most of its length is ill suited for access by terrestrial fauna. 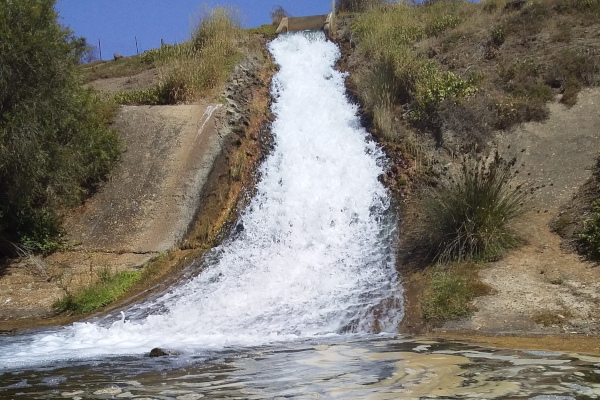 The current location of the outlet pipe is at the head of this section and delivers over 3,000ML per year of water into the Moorabool River.

The City of Greater Geelong has recently undertaken a panel process to determine the manner in which housing development of the area will proceed. This included proposals for the quarry to become a showcase lake. The Panel heard from experts that seepage from the river was around 100 million litres a year. This was deemed implausable by those who know this section of the river and the CCMA commissioned a study to assess the true state of water losses.

Lance Lloyd of LloydEnvironmental along with Professor Peter Delhaus, a ground water expert from Federation University completed the study in mid 2020. It found losses experienced by the Moorabool River through the lowering of the water table and seepage from its bed amounted to on average of over 5 million liters per day.

"The flow data provided demonstrates that losses in the Lower Moorabool can be expected to occur in a magnitude of approximately 3 to 20 ML/day (median of 5.14 ML/d)."

It should be noted this figure is 15 times the rate presented by expert witnesses to the City of Greater Geelong Panel Hearing who stated a figure from a study by Nolan of 102 million litres per year.

They also came to the conclusion that even when the quarry finally fills it remains unlikely that base flows into the Moorabool River will return to normal or that it will stop losing water.

The study summary can be found here; https://ccma.vic.gov.au/wp-content/uploads/2020/07/Fact-Sheet-Lower-Moorabool-River-Final-3-July-2020_CCM_Sharon-1.pdf

People for A Living Moorabool are calling on the State Government, quarry operators, water authorities, the EPA, Councils and developers to do the following:

1.  To agree to a management plan which puts the interests of the Moorabool River at the forefront of any future use of the site.

2. To ensure that the 1930s diversion is replaced with an impervious structure capable of preventing further losses of river flows to the underlying substrates.

3. That a modified pumping regime continue after the quarry is decommissioned designed to match the current losses from the river.

4. That no net water from the Moorabool River, the most flow stressed in Victoria, be used to fill the quarry.

5. That the outlet of the pumped water from the quarry be moved from its current position to a site upstream of the first diversion.