Implemented by the Corangamite Catchment Management Authority the project aims to undertake an assessment of the river reaches between Lal Lal and the confluence with the Barwon River, to locate priority vegetation stands considering ecological/floristic values, and to establish vegetation monitoring sites and baseline condition at priority vegetation stands to assess effectiveness of environmental water delivery over-time.

Also to conduct a Habitat Refuge Pool (HRP) assessment and mapping including assigning each pool a resilience ranking to support drought contingency planning for environmental water use.

On September the 12th 2016 PALM coordinator Cameron Steele accompanied Saul and Anthony from the CCMA to scope for pools to be included in the survey. Spot visited were pools at Batesford, Russell's Bridge, Maude, a large pool below Sharpes Bridge, more pools and weirs below the She Oaks Weir and significant pools above and below Coopers Bridge. 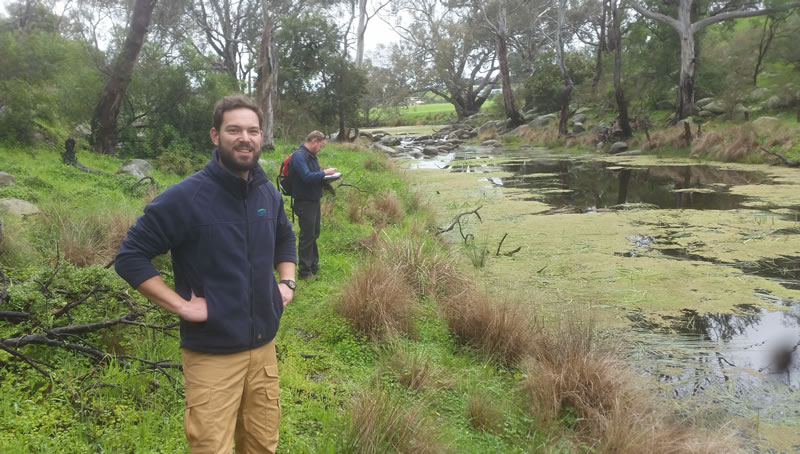 The interest lay primarily in pools that did not dry out during the Millennial Drought. Light rain did not dampen the enthusiasm although there were some pretty wet feet by the end of the day.

PALM welcomes the continued focus of water and management authorities on this struggling river and hope they drive just outcomes for both it and the species dependent upon it.

The Moorabool River and the Golden Plains Intensive Agriculture Precinct

To the intensive animal farming industry, this would have been a welcome announcement, but for many who know of the desperate plight of the Moorabool River it represented water moving out of the catchment and another blow to the prospects of relieving the flow stress of the most over-allocated river in the state.

If the water had come, as some thought it might, via a connection with Geelong, or a recycled source, many people would have applauded the project. However, that is not where the water is drawn. It comes directly from the Moorabool River. While Barwon Water is quick to say there will be no increase in its Bulk Entitlements, it will have to almost certainly more fully exploit those allocations because of this scheme.

How much water will be removed from the Moorabool River each year to supply the Precinct when fully developed?

According to the report commissioned by the Golden Plains Shire Investing in Intensive Agriculture' (September 2006), the answer is 900ML per year. This volume is equal to completely emptying the She Oaks Weir (pictured) of every drop of water every 2 months. It also represents about 75% of the average annual amount of water released from the Lal Lal Reservoir by Barwon Water over the last 5 years.

In their 2012-2062 Water Supply Demand Strategy (page 43) Barwon Water addressed community concerns about the authority's reliance on such a flow stressed river;

"The Moorabool system will contribute a smaller percentage of our water supply as new sources are commissioned. However when water is available in the Moorabool system, it provides drinking water at a low cost to customers." (Click here for full report)

If this 'low cost drinking water' from the Moorabool River is now being diverted to broiler farms and piggeries it stands to reason it will need to be sourced it from somewhere more expensive, thus inevitably forcing pressure on water bills for families in Geelong.

How much weight was given to the condition of the Moorabool River by the proponents?

Investing in Intensive Agriculture' (September 2006), which underpins this project, states:

The White Swan Reservior is in fact fed by the West not the East Moorabool system. In our opinion the report showed, in a number of instances, inadequate understanding of the Moorabool River systems and was practically devoid of any real acknowledgement of the parlous condition of the river.

"The 'Investing in Intensive Agriculture' (September 2006) report proposes a $11.4 million infrastructure project to provide a dedicated water supply to intensive farm operations in the Shelford-Meredith corridor, while freeing up the local reticulated water supply for small communities such as Lethbridge."

It is difficult to understand what water would be 'freed up'.

Given your position “The Moorabool system will contribute a smaller percentage of our water supply as new sources are commissioned. However when water is available in the Moorabool system, it provides drinking water at a low cost to customers.”

The Moorabool Basin is the most over-allocated and flow stressed in the state.

A local farmer on the Lower Moorabool thinks that “This is just another case of water leaving the catchment and not being available to us.”

You officially opened the pipeline to the Precinct on the 17th of May. Six years ago, as the then candidate for Corangamite, you met with locals at the river and were very supportive of efforts to lobby for increased environmental flows for the Moorabool River.

It should be remembered that water for this Precinct is mainly harvested high in the Moorabool catchment and is channeled and piped to the storage on the Midland highway. Water taken by users in the lower section of the Moorabool has instead travelled most of the length of the river, sustaining the environment as it passes.

It is understandable that some might take the view that this new project is a trade off - guaranteeing water to broiler farms and piggeries outside the catchment at the expense of improved water security for existing farms and other businesses in the Lower Moorabool.

After a few long nights we have finally managed to go live with the first of the map sets we have been creating for the Moorabool River.

This is one showing the named rivers and creeks within the catchment and includes the pipes and dams of the water authorities.
http://mooraboolriver.org/index.php/map

There is still a little tidying up to do but if you are aware of any errors please email us at This email address is being protected from spambots. You need JavaScript enabled to view it.

Submissions are now closed to the Water for Victoria discussion paper.

Congratulations to all the groups and individuals who took the time to respond on behalf of the Moorabool River.

It case was also put to the leaders within the Water Plan team.

The final plan is expected to be released mid this year but many will continue to lobby the government.

An Uncertain Future - The Moorabool River in the 2016 Water Plan

The Moorabool River has been acknowledged by successive State governments as one of the most flow stressed in Victoria. Some summers up to 90% of its flow is extracted by water authorities and irrigators. Collated figures from the latest Water Accounts report reveals the Moorabool Basin as the most over-allocated in the state.

The Central Region Sustainable Water Strategy (CRSWS) released by the Bracks Government in 2006 recognised the dire state of the Moorabool River. It found that “environmental flows would need to be enhanced by about 20,000ML to meet scientific environmental flow recommendations”.

The then government committed to providing 6000 ML of water flows by 2015, made up of 2500 ML entitlement as an Environmental Reserve from the Lal Lal Reservoir, 3000 ML from the quarry at Fyansford and 500 ML through a buy-back scheme.

The Barwon Water Bulk Entitlement from Lal Lal is up to 17,775ML per 3 year period. It flows from the Lal Lal Reservoir down 30kms of river to the authority's off-take at She Oaks. It is vital in its own right to the ecosystems along this high value section of the river but it also serves to carry Environmental Reserve releases so they can continue past the She Oaks Weir and impact the 70 kms of river to the confluence with the Barwon River.

The Water for Victoria Discussion Paper issued by the current state government talked about increasing environmental flows in the Moorabool River but Minister Lisa Neville had also flagged a transfer of Geelong's allocation in Lal Lal to Ballarat.

It was hard to see how this would be anything other than a disaster for the lower sections of the Moorabool since it must, on the face of it, mean less flow in a river that is barely being kept alive. It would have dramatically lessen the effectiveness of any environmental releases.

This became a huge level of concern both for those who live along the river and others who also deeply care for its future.

An alliance of Landcare and community groups joined to lobby for the Moorabool River. In order to inform the community at large about the possible impacts of the Water Plan they organised an information night in Meredith Hall on Tuesday the 12th of April 2016. It attracted over 100 people wanting more information about proposed changes flagged in the Water Plan. The presenters were Saul Vermeeren from the CCMA, Cameron Steele from People for A living Morrabool whose presentation can be accessed here, and Angus Ramsey from Southern Rural Water.

The government conducted a series of community workshops and asked for submissions from the public. They were due by the 13th May 2016 and were able to be submitted either by filling in the form online or by emailing it directly at This email address is being protected from spambots. You need JavaScript enabled to view it.

Page 45 of the Water for Victoria Discussion Paper speaks of;

"reconfirming the environmental water recovery targets in the Central Region Sustainable Water Strategy and identifying options to meet existing shortfalls with local communities and stakeholders in the Moorabool, Barwon, Werribee and Maribyrnong Rivers"

The future recovery targets for the Moorabool River had been set out on page 74 of the 2006 CRSW Stategy. They detailed 14,000ML of water that could be left in the river given alternative supplies for Ballarat and Geelong. Both cities now have access to other sources of water. It was time to make sure that these augmentations could enable stress to have been taken off our highly over-allocated Moorabool River.

However after meeting with DELWP officials we learnt that despite the wording these are not on the table as options that are going to be included in the Water Plan. In our view this is completely unacceptable. A lot of time and effort was put in to formulating a path that would see more water being rightly left in this highly stress river. Abandoning these recovery targets is wrong.

People were invited to make a submission to the Water for Victoria discussion paper as well as writing to their local member or the Minister herself.

This email address is being protected from spambots. You need JavaScript enabled to view it.

This email address is being protected from spambots. You need JavaScript enabled to view it.

Further resources were provided for submissions

Table of allocations in the major River Basins in Victoria
Figures taken from the Victoria Water Accounts 2013-14 which clearly show why the Moorabool Basin is the most overallocated in the state.

Ballarat and region’s water future
Selected quotes from an inititive of the previous Victorian government showing recognition of the state of the Moorabool River and a willingness to explore ways of leaving more water in it.

A number of community groups, landcare organisations and individuals took the time to write submissions and put the case for the Moorabool. We now await the final Water Plan to see how this government will respond to the very dire condition of this magnificent river.