In 1847, just on 170 years ago, William Swan Urquhart was tasked with surveying the source of the Moorabool River. This year while scouting locations for the upcoming film a couple of us got a chance to retrace his steps.

This is a closed catchment controlled by Central Highlands Water so permission was sought and kindly granted after undertakings about appropriate safety gear.

The headwaters lie in a small stretch of remnant forest east of the township of Mollongghip and feed into the Moorabool Reservoir. On this particular day a westerly breeze saw the comforting sight of Bunjil soaring in the uplift off the forest edge, an appropriate auspice for our trek.

There was a flat and even access track on the southern side which for the most part ran along side the boundary fence.

Large remnant trees including swamp gums along with many bird calls gave us some sense of what the landscape would have been like during Urquhart's visit. Now the huge irrigation frames dominate the view either side of this thin tract of forest, however there is no denying that some quite high natural values are contained within it.

Off the track and closer in toward the the river itself there was sword grass, ferns, and lots of moss covered trunk and branches. In places the undergrowth was too thick to access the river proper but the sound of trickling water was ever present.

A small spring soak about two thirds of the way in had us thinking we had arrived but it proved to be an offshoot. We pressed on initially missing the site until we doubled back. Even then it took a little while to confirm the location as the growth in and along the river was quite enveloping.

It turns out the Moorabool River West Branch's headwaters are rather incongruously positioned, given all the magnificent remnant natural vegetation, under a stand of imported Californian redwoods of about 70 years of age. Water can be seen moving out from the foot of the basalt upon which they sit feeding a small swampy area about 40 meters across. After walking past mainly open farmland on one side we found this to be quite an enchanting site.

A couple of wallabies had greeted us before disappearing to leave the place all to ourselves. There were plenty of birds calls and several species of butterflies filled the air around us, one of which was not often seen in the wild according to a Museum Victoria source (thank you Marion). Water plants and yabby holes featured as well.

Being in the middle of the irrigation season it was understandable that the soak was mostly dried out when we were there. The SKM report on the impact groudwater harvesting has on the river is sobering. For every 1 ML extracted in this area .8 of a ML does not enter the river as base flows. Under natural conditions it is not hard to assume this river would rarely if ever stop flowing.

It was not difficult to find this place evocative especially knowing the challenges this river faces. It is the birthplace of a river that is asked to provide so much, often well beyond its capacity. It does serve to remind us what we are fighting for; a strengthen, more resilient river, capable of sustaining all the species that rely on it.

We made our way back along the northern bank, a round trip of nearly 8 kilometers. There are some blackberry and thistle infestations that will need attention but on the whole the area is in pretty good condition. A 30 year old plantation of Californian Redwoods is hopefully the last of the managed introduced species to be cultivated within this area. We trust that CHW will continue to look after this special place and seek to enhance its values where they can. 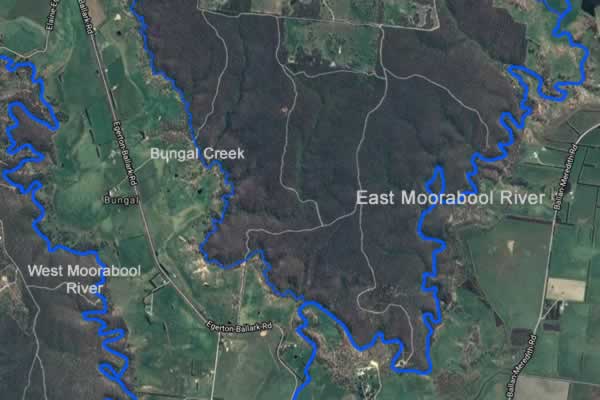 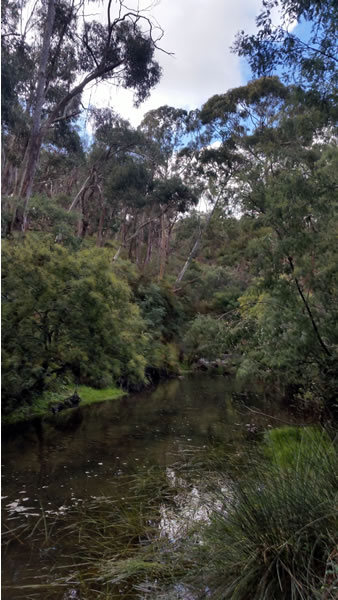 One of the lesser known features on the West Moorabool are the Granite Falls. Situated downstream of the Moorabool Falls below Salt Creek they are characterised by a curtain of cascades over a broad granite span. The right hand section facing upstream has water springing from fissures in the face. The area is badly infested with blackberry bushes but despite this the beauty of the site is quite evident.

On the 29th of December 2016 a group of us met at a site on the Moorabool below Meredith to view the annual movement of hundreds of  juvenile short finned eels up the river. These creatures, barely 20cm long, are finishing their several thousand kilometer journey from the Coral Sea. The peak of the migration occurs between Christmas and New year.

This beautiful section of the river with its deep pools, tumbling falls and high cliffs made for a perfect place from which to observe this remarkable event. 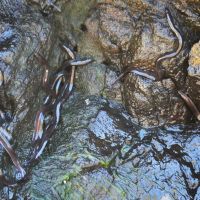 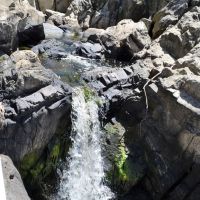 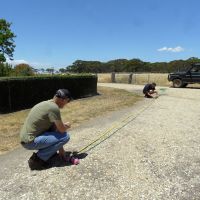 We were also keen to measure the depths at the site as the CCMA is currently undertaking a project identifying habitat pools and were interested in a comparison. With a rudimentary setup (boogie board, 2kg weight and 10mts of 10mm rope) we took over 20 soundings in each of the two pools. The depth in both was impressive with the lower pool measuring and astounding 8.85 meters. At this time we believe it is the deepest natural section of the river.

Our thanks go to Peter and his family for allowing us to visit this amazing section of the Moorabool River.

After a week of substantial rainfall the river finally got going. Lal lal falls were spectacular as were the Moorabool Falls. Visiting the river at Batesford the next day revealed a silent, muscular river making its way toward the Barwon. These flows have definately provided the scouring action the river has sorley needed. While there was some evidence of overbank flows it wasn't all that widespread.

Below is a series of short clips taken on the 14th and 15th of September. The lens on my phone suffered a wee accident so apologies for the spotty nature of the footage.